Left Torla this morning and sped all the way to Zaragoza to return the hire car on time. When I arrived I couldn’t find a petrol station after driving through the city in heavy traffic. I get slugged a 23 euro service charge for not having it full then walked all over the city looking for a non-existent internet place for printing a ticket.

I walk through a migrant area of Africans and Cubans. I’m pretty frustrated by my lack of success here so against my better instincts, buy a train ticket for Barcelona. Not having a hotel reservation could be a mistake but I’ll be somewhere I like and hopefully things improve ’cause today has been a huge hassle.

I would have been good to check out the Cuban community here. Perhaps another time.

On the train to Barcelona, I wonder how long it will take me to get organised. First I need a hotel for tonight and I hope the tourist office is open when I arrive. There is a cool looking girl sitting opposite who speaks English and seems happy to talk. It’s good to have a conversation as I am a bit starved of it. The wet raining countryside flashes past at train speed. The rivers are full and paddocks are full of golden wheat. Ploughed paddocks and the inevitable olive trees.

Spain intrigues and frustrates me. Sometimes it is so difficult to be able to get around that is usually due to my lack of understanding. 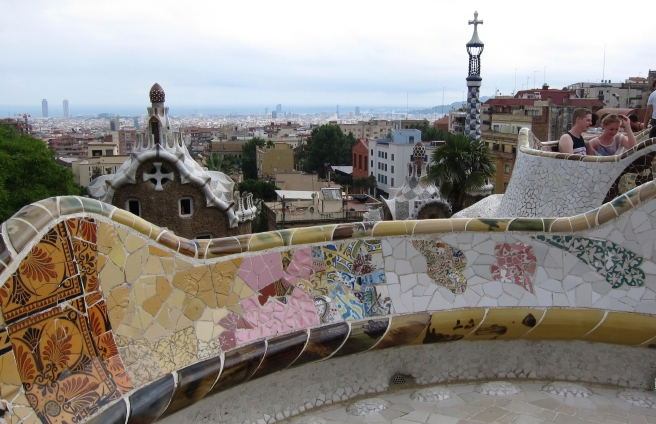 Sitting on a twisted park bench surrounded by dirt littered with plastic bags, cigarette butts and pavement hawkers selling water, jewellery and 1 euro fridge magnets. The tide of tourists walking the path to and fro, looking for excitement in a world of instant gratification. Looking for that momentary high. A world of remote control where we are conditioned to expect instant gratification, to change the channel quickly if we aren’t satisfied instantly.

Park officers arrive and the pavement sellers fold their stacks of goods into bundles and run into the bushes. Perhaps it is illegal or they need a permit or on someone else’s territory. Funny to see. I tap my foot to the music of a one man band playing 70’s songs. John Lennon and Michael Jackson. He sounds great. More instant gratification (buying trinkets, eating, taking a photo, sex, taking a leak, seeing a movie, drugs, it’s all about instant gratification) I’s why I admire artists, they take time to created something from nothing -they take the time.

People think a man travelling alone is curiosity. “Something must be wrong, don’t you have a family, no wife. You are divorced? How sorry I am to hear.”

I sat on a coloured Guadi wall against an organic explosion of coloured tiles, broken and placed over a sinuous curve covering the benches overlooking the city of Barcelona. There are large passenger ships bigger than any building in the city.

It’s all about the photo, like the camera has taken priority as an integral part of the brain an becomes the most important part. Don’t take the time to enjoy yourself, just stop and pose in front of a vista and then shoot, this is easy with a digital camera where you can take twenty shots a minute and delete them later if you choose, just pose and try to look glamorous.

I wonder how the Romans who established the city would have reacted if they could see it’s future. The tourist herd moves along the path to the next vista, to pose and take that million dollar shot.

The worst thing about getting robbed is not the loss of money but the loss of confidence, the paranoia, the fear, the worry, all of it.

I just met a guy who approached me in the street and wanted to converse. A poet, talking about living trees – human trees. I lack confidence, I worry, I walk, l feel my wallet, l look behind me while this guy sprouts poetry.

“You just have to get on a plane,” I say. “I need a haircut and I’m going in here to get off the street.”

It was a way to get rid of the guy. I am now wary of people who come up and bamboozle me in the street. I am here in the city and I will walk and I will get rid of my back-pack and I will go where I need to go and put my valuables into my room for safe-keeping. I will not carry a bag. Just carry what I need and no  more.

“Hey, I just got robbed yesterday so I’m a bit wary an worried,” I said to the woman cutting my hair.

“Someone liberated you of your hard earned cash, I don’t believe it,” she mocked. “Happens to everyone.”

As I was leaving the hairdressers, the paranoia was kicking in then I looked at my reflexion with a savage grin and felt better.

I watched a girl sitting and the way her buttocks curved over the bollard. I looked up at the azure sky, the profile of a white building against the sky was perfect. There were groups  of young people sitting in a circle. A ancient couple shuffling along. A beautiful girl with flowing dark hair reading a book on a bench. In the distance a large fountain glistened. Water spurted from the beaks of giant stone griffins. Acacia trees shaded the crushed granite avenues. I walk among a crowd speaking a dozen European languages. There are African guys selling sunglasses. Indian souvenir-shop sellers. Green clad garbage sanitary workers. Uniformed room cleaners and short skirted American girls. Shops where all the staff are heavily tattooed. I love this country.

The trouble with getting drunk is that you tend to make a fool of yourself. I was bored and lonely so I went out and got drunk and then became obnoxious, later running a gauntlet of hookers on the way back to my hotel. I was sure that people liked me much less the next morning.